These are The world's Best Science and Technology Film Festivals

Filmmaking is perhaps the art most closely linked to the technological advance of the last two centuries. We couldn´t imagine a film camera and a film projector without the technological evolution of the mechanical industry or the creation and improvement of photographic film emulsions.

Not to mention the emergence of the world of electronics and later the digital era, instances that have made it possible to develop new forms of storytelling and interactive narratives.

Guidedoc gives you a selection of The Best Science and Technology Film Festivals around the globe so you can be up to update with the cinematographic possibilities to come.

What are the world's best Science and Technology Film Festivals?

Held in Moscow in October each year, this festival dedicated to documentaries on science and technology is consolidated as a high-profile project of the famous Polytechnic Museum. The main goal of the STFF is to raise awareness of scientific and technological issues that generate new ideas about the world and society.

The film program includes around twenty documentaries in its official competition each year and has four categories, among which one is dedicated to films for children.

Among the most outstanding films of the 2016 edition of the STFF was the Russian Premiere of the film directed by documentary master Werner Herzog “Lo and Behold: Reveries of the connected world”, an inquiry into the virtual world from its origins to its more unimaginable current dimensions.

The film is structured around several conversations that explain how the online world has transformed the way virtually everything in the real world works, from the business world, education, and healthcare to how humans interact socially.

In the section called “People and Technology” a look at the life of Steve Jobs was shown in “Steve Jobs: The Man in the Machine”, directed by Alex Gibney. The documentary not only makes a portrait of the creator of the iPhone, but also addresses the legacy he left behind after his death in millions of people around the world. Among other curiosities is “Unlocking the Cage”, directed by Chris Hegedus, and D.A. Pennebaker, the story of animal rights lawyer Steven Wise and his struggle to break down the barriers between human and animal law, which would allow animals — thousands of them forced to remain as subjects of Scientific laboratory tests — be legally protected.

The festival opens a discussion on the thematic boundary between science and art with the documentary “A boy’s dream” by veteran Dutch documentary filmmakers Cinta Forger and Walter Grotenhuis. The film shows the artistic works of Theo Jansen, who tries to endow nature with a new species through his masterpieces: immense beach animals made with plastic tubes.

The STFF also opens specific spaces for discussion of current dilemmas among the scientific community that affects life in society, such as the increasing impact of Google and other search engines on political elections or the very close possibility that a set of genetics tests could allow us to predict the future and the options humans have to use that information.

Open also to fiction films, the great attraction of this festival rests on the promotion and recognition of new genres and narrative formats created thanks to the technological advances of the audiovisual industry.

The New Media Film Festival, held in June in Los Angeles, California, includes a wide range of activities, among which are a New Media Marketing Table or the Web Series Superstar Panel. Live music concerts and a red carpet for producers, filmmakers and special guests are also part of the events.

The Official Selection is an ideal space for World Premieres and shows films from 37 countries from all continents. The films compete for a long list of prizes divided into different categories that seek to recognize the best works by specialization.

In the 2016 edition, the category of “Best 3D Film” was conquered by the documentary “We Built a Ship”, by director Stefan Sargent, who captured through a series of stereoscopic cameras the work of 150 volunteers during the construction of a ship of wood based on a traditional design dating from 1891. One of the most commented films of that year was “Nobel’s Nightmare”, from Syrian director Chamsy Sarkis. During the film, the spectator accompanies the risky rescue operations of the Syrian Civil Defense through the immersive footage captured by the cameras attached to the helmets of the volunteers whose job is to rescue victims of the bombings to the city of Aleppo.

The New Media Film Festival also awarded as the “Best Online Series” the interactive documentary “Spotlight California” an online documentary that offers a customized experience where the user creates his own narrative navigating through the different episodes that explore stories of inequality in today´s California. 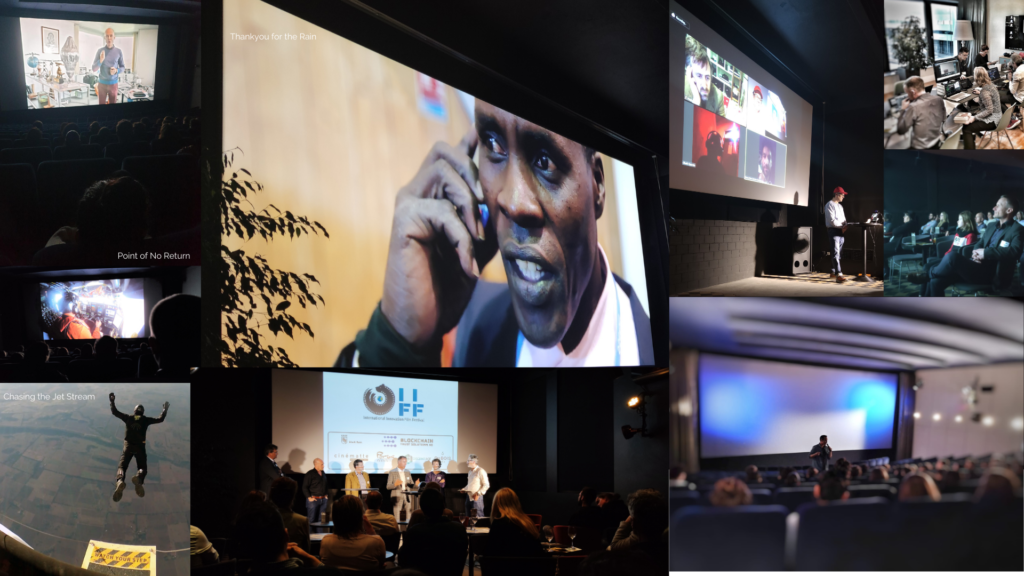 The International Innovation Film Festival is one of the few festivals in Europe - and the only one in Switzerland - that specializes in showcasing films about the newest technological advances of our era.

Created by scientists and film enthusiasts, the IIFF is humanly and altruistically motivated in its programming. Its premise is to show fiction and documentary films that focus on human needs and how technological progress offers solutions to these problems.

In addition to presenting a select number of films to promote a debate on new forms of storytelling, the festival also includes presentations by researchers and experts in the area of technology, thus attracting a community eager to discover leading-edge new technologies and innovations.

Among the titles that have been selected in recent editions of the festival is "Away", a short fiction film only 4 minutes long that utilized a new technology called Virtual Production, which allows a film to be shot entirely inside a studio covered by LED screens that can present any background setting required, be it that of a post-apocalyptic dystopian world or a sunset in a realistic natural setting.

The particularity of this festival is that it lasts three months and is located along several venues in dozens of countries of Asia, the Middle East and Africa. Through selected topics such as urbanization, nature, evolution or human-machine interaction, the aim of the organization is to provide a social and ecological view of the sciences in territories that have historically been overshadowed by Western modernization.

Focused on highlighting “the human printing on the planet” the Science Film Festival position itself within the recent scientific tendency to decree the present geological era as the “Anthropocene Era”, where it is human action and not the natural one that is changing the shape of our planet.

The film “Rare Earths” was the winner in 2016 in the section “Ecofilmprize” which honors the film that makes an exceptional effort to raise environmental awareness. Directed by German Christian Schidlowski this documentary explores the materials needed for green technologies, such as electric cars, wind farms, and solar cells. These materials are called Rare Earths and their extraction from nature is associated with environmental pollution, radioactivity, and damage to large tracts of land. The harmonious relationship between science and nature was also the subject of two winning documentaries in the “Technology Prize” category and the “Special Jury Prize”. In the first section, the short documentary “Bio Materials — Patented Solutions from Nature”, directed by Jakob Kneser shows the process of nature creating natural biodegradable materials, such as spider webs, wood and even glass sponges and the scientific research that seek to replicate this experience by elaborating new intelligent biomaterials.

“The Origami Code”, the jury’s favorite, shows how scientists discover the power of folding in the elements of nature. Like origami, the art of folding paper, nature also gets its shapes when flowers buds or the wings of birds retract. The film directed by Francois-Xavier Vives explains how researchers in the areas of robotics, biology and nanotechnology hope to make new discoveries with this millennial technique.

Unlike the previous events on this list, this festival was born from the heart of a university educational institute, specifically the University of Navarra, in Spain.

Therefore, since its origin, the #Labmecrazy has an important academic imprint, which allows it to have a captive audience that comes from students, professors, and researchers.

However, over the years, the festival has managed to cross borders, and even position itself as one of the most important film festivals dedicated to science and technology in Europe.

The filmmaking community also recognizes it as an important festival in its field. This 2023, for example, the festival has taken on a specific theme "Young people and science", accepting short films, feature films, and TV reports that are related to scientific knowledge and technology.