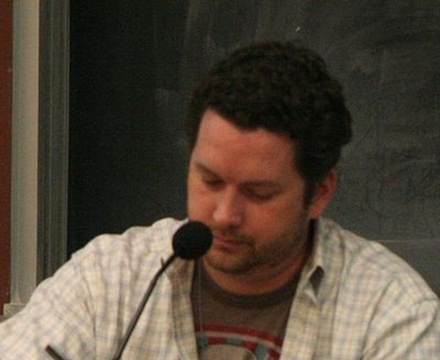 Michael Justin "Burnie" Burns (born 1973) is an independent filmmaker living in Texas. His most notable contributions have been in machinima, although he has also worked with live-action. In April 2003, Burns, along with several of his friends, created the Internet machinima series Red vs. Blue: The Blood Gulch Chronicles. Filmed using the video games Halo, Halo 2, Halo 3, and Halo: Reach. Red vs. Blue was quickly acclaimed for its humor and originality, eventually elevating Burns to the status of an Internet celebrity. Such visibility allowed him to create one of the few successful machinima film-houses in the industry, Rooster Teeth Productions. Burns even attracted the attention of video game giant Electronic Arts, who asked him to create a promotional series using their new game, The Sims 2. The result, The Strangerhood, has received mixed reviews. Burns also premiered P.A.N.I.C.S., a mini-series that utilizes the F.E.A.R. game engine. He has appeared at several film festivals, including Sundance and The Sydney Film Festival. He currently lives in Austin, Texas with his wife and two sons.

Description above from the Wikipedia article Burnie Burns,licensed under CC-BY-SA, full list of contributors on Wikipedia.

Where did memes come from? Can you make a meme? What happens when you become a meme? In The Meme Machine, Rooster Teeth…