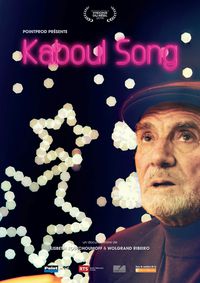 After twenty years of exile near Geneva, Switzerland, Ustad Hossein Arman, a popular Afghan singer, returns to Kabul to act as a member of the jury in the show “Afghan Star”.

Ustad Arman, a popular Afghan singer, returns to Kabul as a member of the jury in the show “Afghan Star”.

In the troubled climate of increasing bomb attacks, the show, a popular music programme and a pure “pax Americana” product, maintains its edition of 2012.

Despite the deteriorating state of the country, despite the violence and his failing health, Ustad Arman agrees to undertake the journey. Because he created a misión for himself: transmit the heritage of the music he excels in to the young generation.

As the thirty years of war have erased this memory, he is the last singer of his generation to be able to do so.