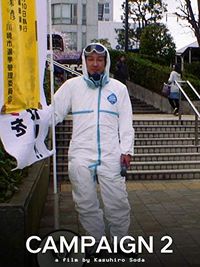 This is the second part of filmmaker Kasuhiro Soda's follow-up to the Japanese political Yama-san, who is now trying to win another election after the Fukushima disaster.

Campaign 2. A political campaign after Fukushima

In response to the Fukushima disaster, Yama-san is running an election campaign with an anti-nuclear message. But unlike last time, he has no money, no machine, no nothing. Does he even stand a chance?

On March 11, 2011, Japan experienced one of the most calamitous nuclear disasters in history. But in two national elections following the accident, the pro-nuclear Liberal Democratic Party (LDP) achieved landslide victories, gaining control of the two parliaments.

Why? 'Campaign 2' by Kazuhiro Soda observes a small local election right after the disaster and gives insight into this difficult question, presenting a microcosm of Japan's political-psychological landscape.