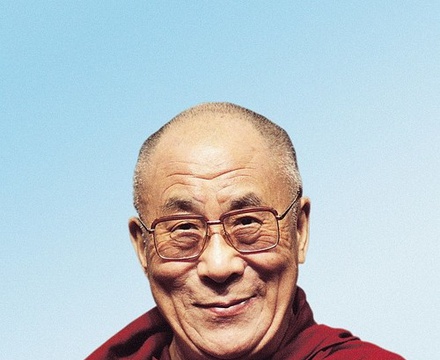 The Dalai Lama is a Buddhist leader of religious officials of the Gelug or "Yellow Hat" branch of Tibetan Buddhism. The name is a combination of the Mongolian word dalai meaning "Ocean" and the Tibetan word meaning "chief" or "high priest." "Lama" is a general term referring to Tibetan Buddhist teachers.
In religious terms, the Dalai Lama is believed by his devotees to be the rebirth of a long line of tulkus who are considered to be manifestations of the bodhisattva of compassion, Avalokiteśvara. Traditionally, the Dalai Lama is thought of as the latest reincarnation of a series of spiritual leaders who have chosen to be reborn in order to enlighten others. The Dalai Lama is often thought to be the director of the Gelug School, but this position belongs officially to the Ganden Tripa, which is a temporary position appointed by the Dalai Lama who, in practice, exerts much influence.
For certain periods of time between the 17th century and 1959, the Dalai Lamas sometimes directed the Tibetan government, which administered portions of Tibet from Lhasa. The 14th Dalai Lama remained the head of state for the Central Tibetan Administration ("Tibetan government in exile") until his retirement on March 14, 2011. He has indicated that the institution of the Dalai Lama may be abolished in the future, and also that the next Dalai Lama may be found outside Tibet and may be female

Description above from the Wikipedia article The Dalai Lama , licensed under CC-BY-SA, full list of contributors on Wikipedia.

Starting with a video conference between The Dalai lama and a group of Chinese human rights lawyers, this documentary s…