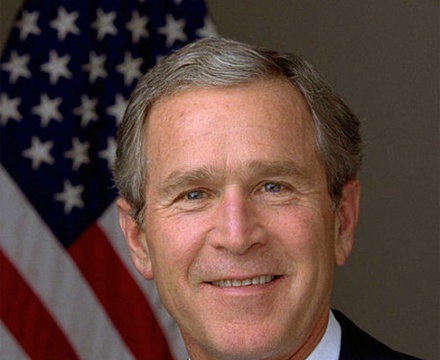 George Walker Bush (born July 6, 1946) is an American politician who served as the 43rd President of the United States from 2001 to 2009. Before that he was the 46th Governor of Texas, serving from 1995 to 2000.
Bush is the eldest son of President George H. W. Bush, who served as the 41st President, and Barbara Bush, making him one of only two American presidents to be the son of a preceding president, after John Quincy Adams. He is also the brother of Jeb Bush, former Governor of Florida.
After graduating from Yale University in 1968 and Harvard Business School in 1975, Bush worked in oil businesses. He married Laura Welch in 1977 and ran unsuccessfully for the House of Representatives shortly thereafter. He later co-owned the Texas Rangers baseball team before defeating Ann Richards in the 1994 Texas gubernatorial election. In a close and controversial election, Bush was elected President in 2000 as the Republican candidate, defeating Vice President Al Gore in the Electoral College. He was named Time Person of the Year 2000 and 2004.
Early on, the Bush administration withdrew from a number of international treaty processes, notably the Kyoto Protocol on global warming. A series of terrorist attacks occurred eight months into Bush's first term as president on September 11, 2001. In response, Bush announced a global War on Terror, ordered an invasion of Afghanistan that same year and an invasion of Iraq in 2003. In addition to national security issues, Bush promoted policies on the economy, health care, education, and social security reform. He signed into law broad tax cuts, the No Child Left Behind Act, the Partial-Birth Abortion Ban Act, and Medicare prescription drug benefits for seniors. His tenure saw national debates on immigration, Social Security, electronic surveillance, waterboarding and other "enhanced interrogation techniques".
Bush successfully ran for re-election against Democratic Senator John Kerry in 2004, in another relatively close election. After his re-election, Bush received increasingly heated criticism from across the political spectrum. In 2005, the Bush Administration dealt with widespread criticism over its handling of Hurricane Katrina. Following this and other controversies, as well as dissatisfaction with the direction of the Iraq War, Democrats won control of Congress in the 2006 elections. As the U.S. entered its longest post–World War II recession in December 2007, the Bush Administration took more direct control of the economy, enacting multiple economic programs intended to preserve the country's financial system. Though Bush was popular in the U.S. for much of his first term,  his popularity declined sharply during his second term. He was a highly controversial figure internationally, with public protests occurring even during visits to close allies, such as the United Kingdom.
After leaving office, Bush returned to Texas and purchased a home in a suburban area of Dallas. He is currently a public speaker and has written a book about his life entitled Decision Points.

Description above from the Wikipedia article George W. Bush, licensed under CC-BY-SA, full list of contributors on Wikipedia.

Based on the forthcoming book by Pepi Leistyna, Class Dismissed navigates the steady stream of narrow working class rep…

Documentary film about the history of Oil prices and the future of alternative fuels. The film takes a wide, yet detail…

In Lies We Trust: The CIA, Hollywood, and Bioterrorism

Its hard to explain the full depth and breadth of the depravity of the pharmaceutical industry, the medical research in…

The shooting of the film about Václav Havel, the president of the Czech Republic, was started in 1992 by Pavel Koutecký…

A crossroad country, a nation divided, Iran is on the rise after a century of political upheaval. The nuclear crisis ha…

Diary of a Political Tourist