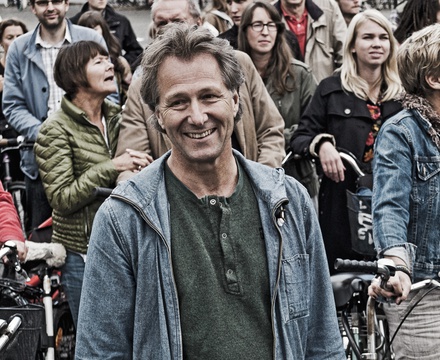 Carl
Fredrik (von) Gertten is a Swedish filmmaker and journalist. Gertten worked as
a journalist for newspapers, radio and television in Africa, Latin America,
Asia and Europe during the 1980s and 1990s. In 1995 he published the travel
book Ung man söker världen (Young man looking for the World) through the
publisher Gong Gong förlag. He wrote for the newspaper Arbetet from 1990 until
it ceased publication in 2000 and for Kvällsposten in 2001-2003. He has also
been the producer of documentaries and entertainment shows for the Swedish
television channels SVT, TV 4 and TV 3. In 2009, Gertten's production company was
sued for defamation by Dole Food Company after the US screening of Bananas!, a
documentary film about a conflict between Dole and banana plantation workers in
Nicaragua over alleged cases of sterility caused by the pesticide DBCP. The
court ruled in favor of the production company, and the lawsuit became the
subject of Gertten's 2011 documentary Big Boys Gone Bananas!.

The Socialist, the Architect and the Twisted Tower

A dramatic, behind-the-scene-story about the building of Santiago Calatravas Turning Torso in Malmö. A 190 meter high, …