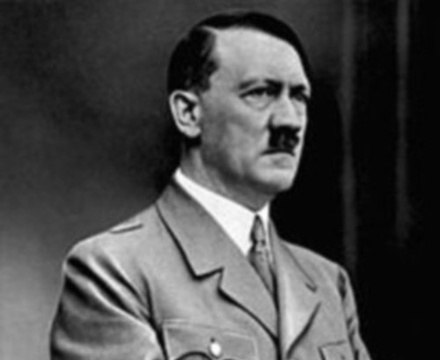 Adolf Hitler ( 20 April 1889 – 30 April 1945) was an Austrian-born German politician and the leader of the National Socialist German Workers Party (German: Nationalsozialistische Deutsche Arbeiterpartei, abbreviated NSDAP), commonly known as the Nazi Party. He was Chancellor of Germany from 1933 to 1945, and served as head of state as Führer und Reichskanzler from 1934 to 1945. Hitler is most remembered for his central leadership role in the rise of fascism in Europe, World War II and the Holocaust.
A decorated veteran of World War I, Hitler joined the precursor of the Nazi Party (DAP) in 1919, and became leader of NSDAP in 1921. He attempted a coup d'état known as the Beer Hall Putsch, which occurred at the Bürgerbräukeller beer hall in Munich on 8–9 November 1923. Hitler was imprisoned for one year due to the failed coup, and wrote his memoir, Mein Kampf (in English "My Struggle"), while imprisoned. After his release on 20 December 1924, he gained support by promoting Pan-Germanism, antisemitism and anti-communism with charismatic oratory and propaganda. He was appointed chancellor on 30 January 1933, and transformed the Weimar Republic into the Third Reich, a single-party dictatorship based on the totalitarian and autocratic ideology of Nazism.
Hitler ultimately wanted to establish a New Order of absolute Nazi German hegemony in continental Europe. To achieve this, he pursued a foreign policy with the declared goal of seizing Lebensraum ("living space") for the Aryan people; directing the resources of the state towards this goal. This included the rearmament of Germany, which culminated in 1939 when the Wehrmacht invaded Poland. In response, the United Kingdom and France declared war against Germany, leading to the outbreak of World War II in Europe.
Within three years, German forces and their European allies had occupied most of Europe, and most of North Africa, and the Japanese forces had occupied parts of East and Southeast Asia and the Pacific Ocean. However, with the reversal of the Nazi invasion of the Soviet Union, the Allies gained the upper hand from 1942 onwards. By 1944, Allied armies had invaded German-held Europe from all sides. Nazi forces engaged in numerous violent acts during the war, including the systematic murder of as many as 17 million civilians, including an estimated six million Jews targeted in the Holocaust and between 500,000 and 1,500,000 Roma,[4] added to the Poles, Soviet civilians, Soviet prisoners of war, people with disabilities, homosexuals, Jehovah's Witnesses, and other political and religious opponents.
In the final days of the war, during the Battle of Berlin in 1945, Hitler married his long-time mistress Eva Braun. To avoid capture by Soviet forces, the two committed suicide less than two days later on 30 April 1945 and their corpses were burned.

Description above from the Wikipedia article Adolf Hitler licensed under CC-BY-SA, full list of contributors on Wikipedia.
​

A collection of death scenes, ranging from TV-material to home-made super-8 movies. The common factor is death by some …

Presents a unique and disturbing look at the rise of the Nazi party. The documentary, directed by Lutz Becker, attempts…

Learn the untold story about the most reviled man in history. Adolf Hitler, The Greatest Story Never Told is a 6-hour …

This Nazi propaganda documentary traces the rise to power of the Nazi party in Germany.