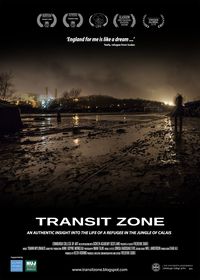 Set in an isolated “jungle” in Calais, Transit Zone follows Teefa, a young man who fled the regime in Sudan with big dreams of a new life in the UK.

Transit Zone, A Young man’s quest for a better life

In “Transit zone” we enter the perspective of 'Teefa' who has fled the regime in Sudan. He is now living in a refugee camp in the jungle of Calais but his dream is to make it one day onto one of the lorries leading to the UK - and hopefully a better life.

But despite a remarkable sense of community, the conditions in the jungle are harsh and taking its toll. Teefa has spent almost half a year in the camp and is tired of trying to cross, as only a few are lucky enough to succeed.

After all jungles are evicted by the police in order to move the refugees to a new camp, Teefa starts to question the greatness of Britain and considers other options instead.

The filmmaker spent 3 months in the camp living with the refugees during the winter. The result is a intimate and atmospheric creative documentary which goes far beyond the ordinary news report.

Frederik Subei Director
Home Blog About Us Contact Us