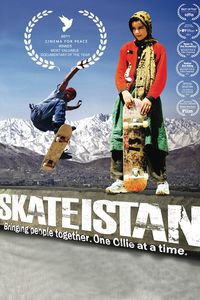 Inspired by Skateistan, Afghanistan's first skateboarding school, this emotional feature-length documentary is a journey deep into the lives of Afghanistan's urban youth. It chronicles the efforts of a grass-roots organization to build the first skate hall in Kabul, follows the first international crew of pro skaters on their visit to Afghanistan, and tells a tale of the irrepressible hope found within a nation's children.

Skateistan, a board and four wheels in Kabul

The feet of Mujtaba, a 14-year-old Young boy move on a skateboard along the dirty and rough sidewalk of Kabul, the capital of Afghanistan, where a few minutes before a war helicopter launched a missile and a line of military tanks passed before the eyes of the pedestrians that pass by. It is the same street where Mujtaba lives in the basement a residential building and wash vehicles to survive after an endless war took the life of his father. But while he is on his skateboard, young Mujtaba escapes his country´s turmoil and become, at least for a few minutes, a citizen of a not so distant place called Skateistan.

Skateistan, a board and four wheels in Kabul (Afghanistan, United States, 2011), is an intrepid documentary about the construction of a Skateboard complex in the heart of a city at war. In an hour and a half of film, young people with or without a burka, and from contrasting landscapes of Kabul will tell us how their lives changed through the conquests of pirouettes and the speed achieved with an almighty board. It is all thanks to Skateistan , an award-winning nonprofit organization that seeks to empower at-risk youth through education and, above all, a skate board.

Watching the film is like stepping into a overwhelming yet inspiring reality. In Afghanistan, fifty percent of the population is under 15 years old because of war casualties. Skateistan aims to reach this floating generation and built from the ruins a whole new leadership. In the first thirty minutes of film we see how Skateistan leaders make a skateboard ramp out of an old and dry public fountain. Although Afghan women are banned from cycling, there is no such aversion to the skateboard; so many Afghan girls have the opportunity to show his skills on wheels all around.

Among the many achievements of t Skatestitan is the fact that Afghanistan has the world’s highest percentage of female skaters. Some people say that cinema cannot change the world. As we find the way to deny so, after seeing Skateistan we can at least say that the camera can be there, anywhere in the world, to witness the most urgent changes.