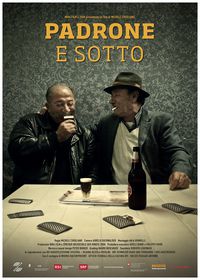 Back in southern Italy, the filmmaker revisits and reinterprets a bar that made a strong impression in his childhood.

Master and Vassal. Between the game and reality in a bar in southern Italy

In a small, shabby bar in the deepest South of Italy, the men of the village meet to play the card and drinking game Padrone e Sotto in their free time. The winner is the drinker - the loser is the one who is never invited to drink.

As the beer flows and the minds of farmers, nurses, mechanics and hunters heat up, director Michele Cirigliano tries to understand what confused him as a child when watching this game: Where is the boundary between game and reality?

Are these men just playing, or are they serious when they yell at each other? Padrone e Sotto shows more than the superficial pleasure of being together among friends.