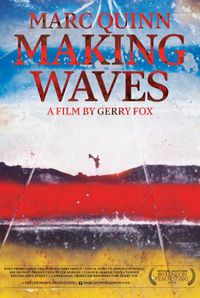 This documentary follows the prominent British artist Marc Quinn for more than a year in his life as he creates and exhibits new works around the world.

Marc Quinn - Making Waves. The art and the nature

Filmed all over the world, Making Waves takes the viewer on a roller coaster ride of Quinn’s hectic life as he travels from openings and exhibitions of his work to studios and wokshops where he conceives and creates his work.

The viewer becomes a fly on the wall as he attends the unveiling of his giant bronze seashells – The Archaeology of Art – in New York; in Venice where he oversees the reworking of his famous Alison Lapper sculpture (that graced the Fourth Plinth in Trafalgar Square and opened the London 2012 Paralympics) and in Hong Kong and Istanbul where his work, including the notorius ‘Self‘ (a model of Quinn’s head made of his own blood) is exhibited to a delighted audience of collectors and fans.