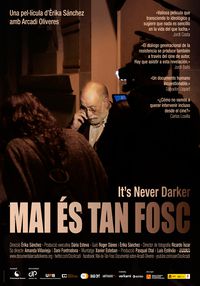 This documentary draws a portrait of the economist and activist Arcadi Oliveres who led the student struggle against the Franco regime, was one of the founders of the World Social Forum in Porto Alegre and participated in the movement of the Indignados in Spain.

It's Never Darker. The life of an anti-capitalist pioneer

Outrage, analysis of reality and coherence characterize his discourse and provide him with an incontestable veracity.

This film is road movie that unites the rumble of the masses with the individual struggle of a man to overcome the pitfalls of the human condition.