Keys to the Castle 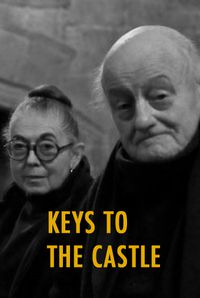 A touching and often funny observational documentary about a charming couple in their twilight years, who have lived in their beloved Scottish castle since rebuilding it from ruins 40 years ago.

Keys to the castle, the guardians of the Scottish castle

In the middle of the cloudy northern fields of Scotland, an immense castle is guarded by Alisoun and Sandy Grant, a married couple that for more than four decades live, as in medieval times, within a beautiful stone fortress. But in the autumn of their lives, these caring custodians find it increasingly difficult to take care of the rooms, corridors and gardens of the gigantic dwelling they once rebuilt from the ruins. The solution seems to be selling the castle, which is coveted by many, and move to another place that fits their age.

In Keys to the Castle, Scottish director Darren Hercher gives us entrance to the interior of the Grant's castle as they prepare to face the detachment to their great stone palace. Inside, the subtle work of the film camera makes us feel so close to them that we seem to smell the damp mist of the kitchen where they both spend their mornings or feel the ray of sunshine that passes through the many windows.

Through an observational approach only punctuated by the precise questions that Hercher asks them during the shooting, we accompany a relentless Alisoun and a sedentary Sandy during their daily labors while they tell us their impressions about the impending detachment of their piece of land, the memories of their golden years — which we see on screen through beautiful and colorful 16 millimeters film footage — and the secrets and stories that the walls and objects that fill the castle cannot tell us.

The narrative vehicle of the film rests on the restless trace of Alisoun, who due to the advanced age of her husband, has the responsibility to do the maintenance of the castle. With an enviable vitality, we see her attending the visits of several potential buyers, leading a guided tour to curious visitors, performing the dedicated gardening and even burying a new cat in the animal cemetery where so many former companions rests in peace. Keys to the Castle is a beautiful film about a dwelling that begins to expire and a marriage that is fading to a beautiful autumnal tone.