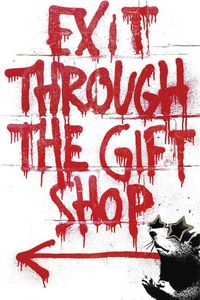 Banksy is a graffiti artist with a global reputation whose work can be seen on walls from post-hurricane New Orleans to the separation barrier on the Palestinian West Bank. Fiercely guarding his anonymity to avoid prosecution, Banksy has so far resisted all attempts to be captured on film. Exit Through the Gift Shop tells the incredible true story of how an eccentric French shop keeper turned documentary maker attempted to locate and befriend Banksy, only to have the artist turn the camera back on its owner.

Exit Through The Gift Shop

Certainly you have heard about Banksy many times: an anonymous street artist known for his controversial graffiti that denounce the darkest side of Western society. The artist attacks with ferocity the cruelty against the most disadvantaged people, how money manipulates minds, the power of big corporations, the manipulation of mass media and so on.

Exit Through the Gift Shop has also been classified as a mockumentary or fake documentary, a fact that has added even more mystery if possible. The main plot explains the comings and goings of Thierry Guetta, a French graffiti artist living in LA fascinated by, among others, the director of the documentary: Banksy.

Banksy anonymity remains, of course: his appearances are in the shadows, with a hood and with an altered voice. A game where the public will have to discern between fiction and reality, between satire and criticism, irony and a particular sense of humor.

Street art as you have never seen before; a work of art as fascinating as the director himself and his controversial templates.