Even A Bird Needs A Nest 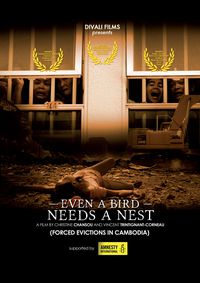 Even A Bird Needs A Nest is a documentary film about forced evictions in Cambodia, a phenomenon that is raging throughout the country.

Even A Bird Needs A Nest. The forced evictions in Cambodia

In present Cambodia, the government grant land concessions to powerful companies to use for commercial purposes. Some of these land belong to the people.

Facing threats, intimidations, and a corrupt justice system, those who dare to protect their land risk their lives doing so.

In Phnom Penh, the state capital, residents of the Boeung Kak district are forcibly evicted from their homes, obliged to live in relocation camps, without basic services and infrastructures.