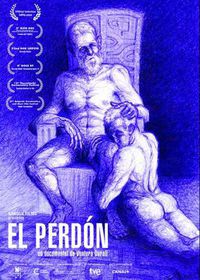 In 1994, Andres Rabadan surrenders to the police after derailing three trains and killing his father with a crossbow. At trial he is found not guilty when diagnosed with paranoid schizophrenia and is forced to be detained in a psychiatric ward for the next 20 years. After a personal descent into hell, Rabadan is ricovered as a person using the painting to exorcise the demons. And in this new bloom, new evidence of himself and his immediate environment make us see a more complex reality than that which emerged in the trial, revealing intimate secrets that have remained hidden for over a decade.

The Forgiveness, a film about the animal instinct we all have

Fifteen years after he killed his father with three crossbow arrows he gave himself as a Christmas gift and having declared himself innocent arguing his alleged mental illness, Andrés Rabadán appears in public for the first time to tell his side of the story that shocked Spain in 1994.

“¿You think you know me? Well, you don´t. Because, if it happened to me… ¿Why wouldn´t it happens to you as well?” Spoken with the cold voice of someone who knows he has taken a life, this particular phrase opens the documentary written and directed by Spanish director Ventura Dural, a cinematic approach similar to the classic Erol Morris´s “The thin blue line” or Werner Herzog´s “Into the Abyss”.

Rabadan´s expressionists drawings made during his time in prison and an intelligent alternation of interviews of Rabadan himself and other important people close to the murder case and trial are the main two narrative resources that Dural uses with elegance and audacity to sew a story that drinks both from horror and detective genres.

Rabadan´s sister, Carmen, appears as the most important catalytic factor to give a new dimension to the story as the case expands in front of our eyes in its whole causes and consequences. The main pieces of this dark puzzle are a medieval murder weapon, a glass of milk that provokes discord, a series of attacks to a coastal railway train and an unexpected break point that Carmen herself puts on the table just as the end of the film approaches.

To watch The Forgiveness is to orbit around a volatile but human character. Is to dig inside in the inner animal instinct we all have. The film makes us question ourselves if that instinct will always be asleep.

This and other great doc on GuideDoc.