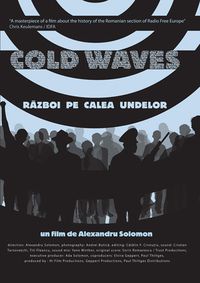 "While Ceausescu was alive, we knew who was good (the West and the United States) and who was evil. Since then, things have become more complicated." Filmmaker Alexandru Solomon believes the story of this propaganda war can help us discern the shades of grey in contemporary conflicts. "Look at our Radio Free Europe editors: you could be fighting on the right side and still be part of a dirty game." With extraordinary archive material, interesting interviews with people from both sides of Radio Free Europe, and by creating a very special atmosphere in reenactments, this talented Romanian director offers a dramatic and vivid lesson in political propaganda.

Cold Waves, the media war under the magnifying glass

Romania, under the mandate of Nicolae Ceausescu. Under the magnifying glass: the Romanian branch of Radio Free Europe, the radio station financed by the C.I.A, which was the most popular radio among those who lived in Romania under communist rule.

After living those times on the other side of the “iron curtain”, Romanian director Alexandru Solomon goes “behind the booth” of the RFE to dig in the model of propaganda applied by the station in search for an idealized truth. The documentary takes advantage of a rich reservoir of archival material, interviews with former station workers and even enemy agents who conspired against it.

Through certain roses with conspiracy theories, testimonies and reenactments, Solomon manages to sew a film with a catchy edition and a classic narrative that absorbs our attention at all times. The greatest achievement of Cold Waves is to establish itself as a political and historical document on socialist Rumania.