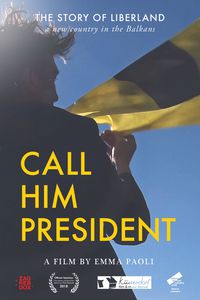 In a disputed territory between Serbia and Croatia, a man planted the flag of the fictional country called "Liberland". Will this self-proclaimed "president" be able to found a country from scratch?

Call him president. In the country of nowhere

Call Him President tells the story of a man trying to start a new country from scratch on a land in dispute between Croatia and Serbia.

His name is Fit Jedlicka. In 2015, this 33 years-old libertarian from the Czech Republic planted a flag on a swamp along the Danube river. He baptized it the Free Republic of Liberland.

Two years later, nobody lives in Liberland as the Croatian police arrests anyone trying to settle there. The film follows the adventures of the president Vio Jedlicka and his henchman, Vladan Jovanovic, a mysterious war veteran from Serbia.