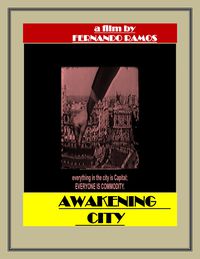 Awakening City presents an universal debate on the role of public spaces in contemporary cities, the conflicts of cars against people; malls against parks and squares; private against public; consumer against citizen; destructive urbanism against green areas.

Proposing a contemporary dicotomi between modern masification against a more organic, public way to live in the same habitat, this documentary provides a set of international cases, strategies and proposals aiming full implementation of the Right to the City.