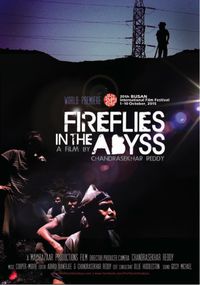 This inspiring documentary follows Suraj, an 11-year-old boy who works in the coal mines of northeast India, a confinement he hopes to leave one day.

Fireflies In The Abyss. A boy’s dream in the coal mines in India

The ‘rat-hole’ mines in the Jaintia Hills of NorthEast India, are hostile pits where men and boys risk their lives everyday to scratch coal out of hard rock.

With the odds stacked against him, 11-year old Suraj, toils in the dangerous mines with an indomitable spirit and a stubborn smile, hoping to one day escape the dark abyss and return to school.

The film follows Suraj and several other miners whose lives intertwine with his, to reveal lives under extraordinary circumstances and the brutal choices they are forced to resolve at every turn.