A Will For The Woods 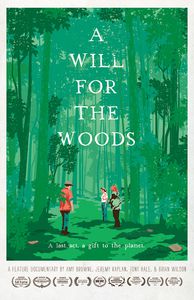 This unique film follows the musician and folk dancer Clark Wang as he prepares his own "green burial" before his death. In the middle of the forest, an environmental act gives way to a dignified death.

A Will For The Woods. A last environmental act for the planet

What if our last act could be a gift to the planet? Determined that his final resting place will benefit the earth, musician, psychiatrist, and folk dancer Clark Wang prepares for his own green burial while battling lymphoma.

The spirited Clark and his partner Jane, boldly facing his mortality, embrace the planning of a spiritually meaningful funeral and join with a compassionate local cemetarian to use green burial to save a North Carolina woods from being clear-cut.

With poignancy and unexpected humor, A Will for the Woods portrays the last days of a multifaceted advocate – and one community's role in the genesis of a revolutionary movement.