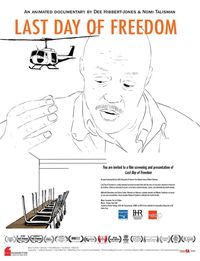 This Oscar-Nominated animation illustrates the dilemma of Bill Babbitt, who must make a decision when he realizes his brother has committed a crime: to call the police or keep quiet.

Last Day OF Freedom. An animation about criminal justice in the US

When Bill Babbitt realizes his brother Manny has committed a crime he agonizes over his decision- should he call the police?

Last Day of Freedom, a richly animated personal narrative, tells the story of Bill’s decision to stand by his brother in the face of war, crime and capital punishment.

The film is a portrait of a man at the nexus of the most pressing social issues of our day – veterans’ care, mental health access and criminal justice.