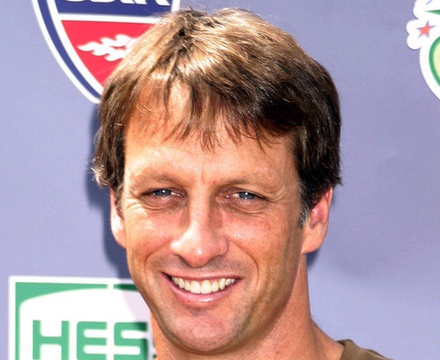 ​From Wikipedia, the free encyclopedia.   Anthony Frank "Tony" Hawk (born May 12, 1968) is an American professional skateboarder. Hawk gained significant fame for completing the first 900 as well as his licensed video game titles distributed by Activision. He is widely considered one of the most successful and influential pioneers of modern vertical skateboarding.
Raised in San Diego, California, Hawk was described as being "hyperactive" as a child. His parents supported his skateboarding because it served as an outlet for his excessive energy, and as Hawk's skills developed, he became a professional skateboarder at age fourteen. In 1999, he became the first skater to land a 900. In 2002, he created the Boom Boom HuckJam, an extreme sports exhibition and tour which launched in Las Vegas. Throughout his career, Hawk has made numerous appearances in films and other media, as well as his own series of video games. He has also been involved in various philanthropic activities including his own Tony Hawk Foundation which helps build skateparks in underprivileged areas, and also including collaborations with other athletes in the charity Athletes for Hope. Description above from the Wikipedia article Tony Hawk, licensed under CC-BY-SA, full list of contributors on Wikipedia.

It combines visual effects, daring stunts, underwater photography and a shockingly bold visual style. It is an ode to a…

More than a decade after the release of the revolutionary skateboarding film The End, Birdhouse comes full circle with …

With the beautifully photographed urban world of Dublin as a backdrop, this film reflects on the evolution of Skateboar…