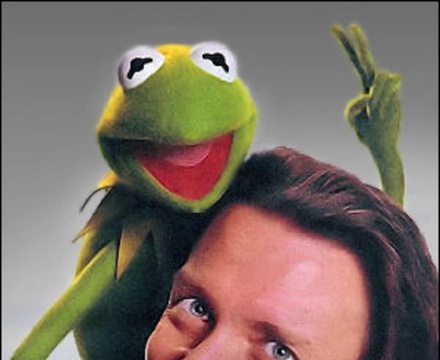 Steven Whitmire (born September 24, 1958) is an American puppeteer who works with The Jim Henson Company and Sesame Workshop. He has been the performer of two signature Muppets - Kermit the Frog and Sesame Street's Ernie - since the death of their creator, Jim Henson, in 1990. Characters original to Whitmire include Rizzo the Rat, Lips (the trumpet player from Dr. Teeth and the Electric Mayhem), Foo-Foo (Miss Piggy's beloved dog), Fraggle Rock's Wembley Fraggle, and Bean Bunny. Following the death of puppeteer Richard Hunt and Jerry Nelson's departure, Whitmire took over the roles of Beaker and Statler. He also voiced Link Hogthrob in the Muppet Party Cruise.

Description above from the Wikipedia article Steve Whitmire, licensed under CC-BY-SA, full list of contributors on Wikipedia .