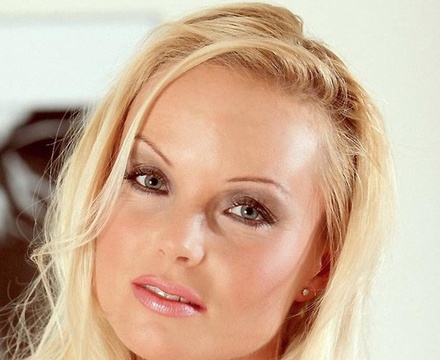 Silvia Saint was born Silvia Tomcalova on February 12, 1976, in what is now the Czech Republic. After graduating school, she studied management for two years at an institute in Brno. Later she was employed as a hotel manager in Zlin, and held jobs in other companies as an accountant and marketing coordinator. Financially she wasn't going anywhere, so she decided that a career in modeling would be more rewarding than her previous jobs. She quickly graduated from modeling underwear in lingerie shows to nude layouts in magazines. Her boyfriend took her to a casting session for an American porn production, and she soon found herself in Frank Thring's "Lee Nover: Search for the Perfect Breasts". After some layouts in "High Society", "Swank", "Cheri" and "Club International", Silvia hit the jackpot in 1996, when she became a "Penthouse" Pet in the Czech "Penthouse" magazine. Two years later she was a "Pet" in the American issue of "Penthouse", too.