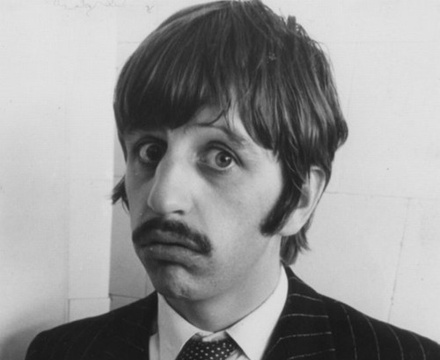 Richard Starkey, MBE (born 7 July 1940), better known by his stage name Ringo Starr, is an English musician, singer-songwriter, and actor who gained worldwide fame as the drummer for The Beatles. When the band formed in 1960, Starr was a member of another Liverpool band, Rory Storm and the Hurricanes. He became The Beatles' drummer in August 1962, taking the place of Pete Best. In addition to his contribution as drummer, Starr featured as lead vocals on a number of successful Beatles songs (in particular, "With a Little Help from My Friends", "Yellow Submarine", and The Beatles version of "Act Naturally"), as co-writer with the song "What Goes On" and primary writer with "Don't Pass Me By" and "Octopus's Garden".
As drummer for The Beatles, Starr was musically creative, and his contribution to the band's music has received high praise from notable drummers in more recent times. Starr described himself as "your basic offbeat drummer with funny fills", technically limited by being a left-handed person playing a right-handed kit. Drummer Steve Smith said that Starr's popularity "brought forth a new paradigm" where "we started to see the drummer as an equal participant in the compositional aspect" and that Starr "composed unique, stylistic drum parts for The Beatles songs". In 2011, Starr was picked as the fifth-best drummer of all-time by Rolling Stone readers, behind drummers such as John Bonham, Keith Moon and Neil Peart.
Starr is the most documented and critically acclaimed actor-Beatle, playing a central role in several Beatles films, and appearing in numerous other movies, both during and after his career with The Beatles. After The Beatles' break-up in 1970, Starr achieved solo musical success with several singles and albums, and recorded with each of his fellow ex-Beatles as they too developed their post-Beatle musical careers. He has also been featured in a number of TV documentaries, hosted TV shows, and narrated the first two series of the children's television series Thomas the Tank Engine & Friends. He currently tours with the All-Starr Band.

Description above from the Wikipedia article Ringo Starr, licensed under CC-BY-SA, full list of contributors on Wikipedia.

The Beatles on Record

A collection of interviews and footage of the band detailing how their sound progressed and how their albums were made.

Inter-cut with archive material, friends, family and associates of the musician tell the story of his life and how spir…

John Lennon, David Bowie, Julian Lennon, and Yoko Ono Lennon are featured in this portrait of the life of musician John…

"Touring makes you crazy," Frank Zappa says, explaining that the idea for this film came to him while the Mothers of In…

The Beatles, with Billy Preston, gave their final live performance on January 30th 1969 atop the Apple building at 3 Sa…

The Concert for Bangladesh

Ringo Starr and the Roundheads - Live

Filmed at this historic Genesee Theatre in Waukegan, Illinois on June 24, 2005 - this amazing, one-night-only event pre…

In the summer of 2005, a package arrived at the Hollywood offices of Highway 61 Entertainment from London with no retur…

30 minute documentary about the making of the film Help! with Richard Lester, the cast and crew. Includes exclusive beh…

The Beatles Anthology documentary series was first broadcast in November 1995. The documentary used interviews with The…

Documentary film about The Beatles rehearsing and recording songs for the album Let It Be in January 1969. The film fea…

All You Need Is Klaus

The story of Freda Kelly, a shy Liverpudlian teenager asked to work for a young local band hoping to make it big: The B…

All Together Now details the story behind the unique partnership between The Beatles &amp; Cirque du Soleil that result…

The Kids Are Alright

Through concert performances and interviews, this film offers us an "inside look" at this famous rock group, "The Who".…

The Beatles: Love Me Do - A Documentary

On October 5th 1962, the Beatles released their first single, Love Me Do. It was a moment that changed music history an…

Who Is Harry Nilsson (And Why Is Everybody Talkin' About Him?)

The documentary explores the enigmatic life and music of Harry Nilsson in an attempt to answer the question, "Who is Ha…

Amazing Journey: The Story of The Who

A documentary on The Who, featuring interviews with the band's two surviving members, Pete Townshend and Roger Daltrey.

Rare and Unseen: The Beatles

The Beatles. Their story is told for the very first time using original rare film and video of the band, including home…

A one-of-a-kind compilation offering a fascinating, entertaining, and surprising look at the Fab Four with rare newsree…

Alf Bicknell, who was the Beatles' driver and road manager, shows footage, photographs and outtakes taken while he was …

On October 9th, 1972 an exhibition of John Lennon/Yoko Ono's art, designed by the Master of the Fluxus movement, George…

Geoffrey Giuliano is a Beatleologist who has written lots of books about them ,notably an interesting Harrison biograph…

Mr. Blue Sky: The Story of Jeff Lynne and ELO

Decades later it's a little hard to appreciate just how shocking Plastic Ono Band was at the time of its release. Yes, …

You Can't Do That! The Making of 'A Hard Day's Night'

Thirty years after A Hard Day's Night, its producer, director, writer and others describe its making. United Artists Re…

The Making of Sgt. Pepper

The Beatles: Eight Days a Week - The Touring Years

A compilation of found footage featuring music, interviews and stories of the Beatles 250 concerts from 1963 to 1966.

Ringo Starr: Off the Record

A conversation between Ringo Starr and The Eurythmics's Dave Stewart. Ringo talks about the early days and how he came …

How the Beatles Changed the World

The fascinating story of the cultural, social, spiritual, and musical revolution ignited by the coming of the Beatles. …

The World of Peter Sellers

Banned by the BBC in 1971, director Tony Palmer's profile of the late Peter Sellers was, in the words of the film's sub…