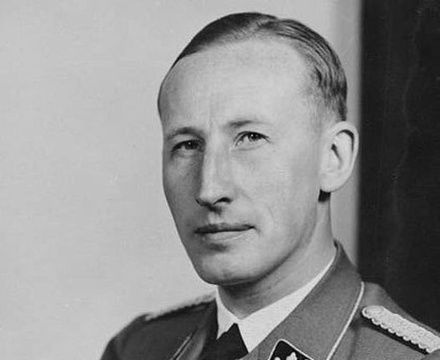 Reinhard Tristan Eugen Heydrich (7 March 1904 – 4 June 1942), also known as The Hangman was a high-ranking German Nazi official. He was SS-Obergruppenführer (English: General) and General der Polizei, chief of the Reich Main Security Office (including the SD, Gestapo and Kripo) and Stellvertretender Reichsprotektor (Deputy Reich-Protector) of Bohemia and Moravia. In August 1940, he was appointed and served as President of Interpol (the international law enforcement agency). Heydrich chaired the 1942 Wannsee Conference, which discussed plans for the deportation and extermination of all Jews in German-occupied territory. In an operation named Operation Anthropoid, he was attacked in Prague on 27 May 1942 by British-trained Slovak and Czech agents who had been sent to assassinate him in Prague. He died approximately one week later due to his injuries.

Description above from the Wikipedia article Reinhard Heydrich   licensed under CC-BY-SA, full list of contributors on Wikipedia.