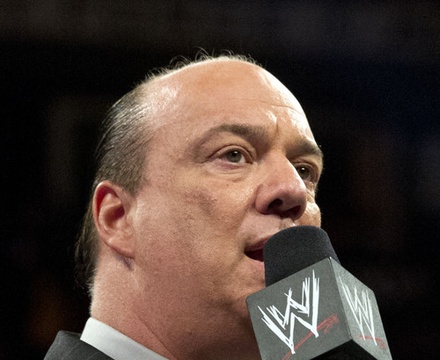 Paul Heyman is an American entertainment producer, performer and marketing guru currently signed to WWE, where he is the advocate for Brock Lesnar and the manager of Curtis Axel; they are dubbed as "Heyman Guys". He is also the co-founder of an advertising marketing and branding firm called The Looking4Larry Agency in New York City, well known for its social media marketing and viral video production and distribution. Heyman is best known for his career in professional wrestling as a promoter, manager, commentator, and journalist, and is infamous for his unscrupulous business tactics both on and off screen. Heyman also served as the secondary antagonist in WWE. Heyman was the creative force behind the revolutionary promotion Extreme Championship Wrestling in the 1990s. He has also worked in Ted Turner's World Championship Wrestling, the American Wrestling Association and World Wrestling Entertainment, including WWE's ECW brand where he was recognized as the ECW Representative in front of the camera, and was the general manager and brand manager behind the scenes.

Ladies and Gentlemen, My Name Is Paul Heyman

This wrestling documentary covers one of the most controversial managers and figures in WCW, ECW and WWE history! For t…