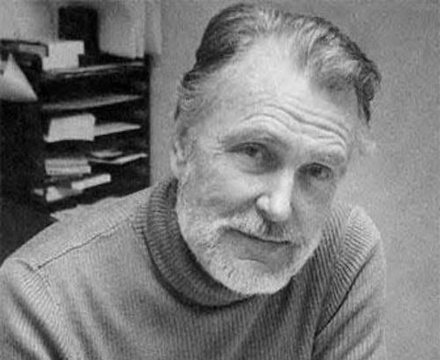 Larry Buchanan (born Marcus Larry Seale Jr.) (January 31, 1923 – December 2, 2004) was a film director, producer and writer, who proclaimed himself a "schlockmeister". Many of his titles have landed on "worst movie" lists, but all at least broke even and many made a profit.

Buchanan was born in Mexia, Texas. He was orphaned as a baby, and was raised in Dallas in an orphanage. It was while growing up there that he became fascinated with the movies which were shown in the orphanage's theater. He considered becoming a minister, but visited Hollywood and landed a job in the props department at 20th Century Fox. He made movies for the United States Army Signal Corps during World War II.

In the early 1950s, Buchanan began producing, writing, editing and acting in his own movies. The first was The Cowboy in 1951.

He is perhaps best known for exploitation, science fiction, and other genre films, including Free, White and 21, High Yellow, The Naked Witch, The Loch Ness Horror, and Mistress of the Apes. Among Buchanan's work, eight direct-to-television films he wrote, produced, and directed under his own Azalea Films production entity in the mid- and late-1960s, for American International Pictures, still generate a good degree of fan adoration. The titles — The Eye Creatures, Zontar, The Thing from Venus, Creature of Destruction, Mars Needs Women, In the Year 2889, Curse of the Swamp Creature, Hell Raiders, and It's Alive! — were largely remakes of AIP films from a decade earlier. Buchanan's instructions from AIP were We want cheap color pictures, we want half-assed names in them, we want them eighty minutes long and we want them now.

In 1964, Buchanan created The Trial of Lee Harvey Oswald, which presented an alternate history in which John F. Kennedy and Lee Harvey Oswald both survived Kennedy's assassination. In 1984 he produced Down on Us, which charged that the United States government was responsible for the deaths of Jimi Hendrix, Jim Morrison and Janis Joplin.

Buchanan's autobiography is entitled It Came from Hunger: Tales of a Cinema Schlockmeister.

After he died in 2004 in Tucson, a long obituary in the New York Times  summarized his work thus: "One quality united Mr. Buchanan's diverse output: It was not so much that his films were bad; they were deeply, dazzlingly, unrepentantly bad. His work called to mind a famous line from H. L. Mencken, who, describing President Warren G. Harding's prose, said, 'It is so bad that a sort of grandeur creeps into it.'"

Description above from the Wikipedia article Larry Buchanan, licensed under CC-BY-SA, full list of contributors on Wikipedia.

The Other Side of Bonnie and Clyde