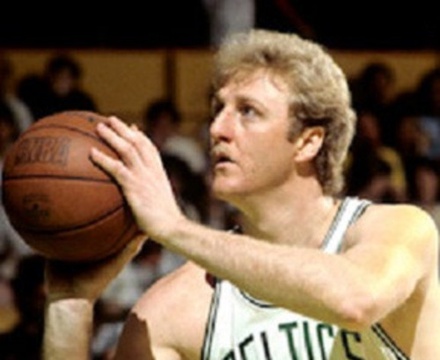 Larry Joe Bird (born December 7, 1956) is a former American NBA basketball player and coach. Drafted into the NBA sixth overall by the Boston Celtics in 1978, Bird started at small forward and power forward for thirteen seasons, spearheading one of the NBA's most formidable frontcourts that included center Robert Parish and forward Kevin McHale. Due to chronic back problems, he retired as a player in 1992. Bird was voted to the NBA's 50th Anniversary All-Time Team in 1996 and inducted into the Naismith Memorial Basketball Hall of Fame in 1998. He served as head coach of the Indiana Pacers from 1997 to 2000. In 2003, he assumed the role of president of basketball operations for the Pacers, which he currently holds.

Description above from the Wikipedia article Larry Bird, licensed under CC-BY-SA, full list of contributors on Wikipedia.

Magic & Bird: A Courtship of Rivals

Magic &amp; Bird: A Courtship of Rivals is a 2010 television documentary film broadcast on HBO. The film chronicles the…