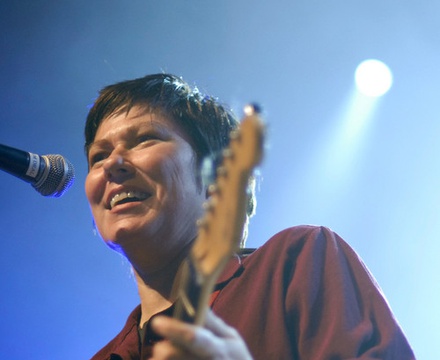 Kimberley Ann Deal (born June 10, 1961) is an American singer, songwriter and musician, best known as the bassist (and backup/lead vocalist) of the alternative rock band the Pixies and the lead vocalist and rhythm guitarist for The Breeders. Deal first joined the Pixies in January 1986 as the band's bassist, adopting the stage name Mrs. John Murphy for the band's releases Come On Pilgrim and Surfer Rosa. Following Doolittle and the Pixies' resulting hiatus, she formed The Breeders with Tanya Donelly and Josephine Wiggs. After the Pixies reconvened in 1990, Deal felt increasingly sidelined by the band's frontman, Black Francis; this led to the Pixies' breakup in early 1993.

Deal then returned her focus to The Breeders, who released the platinum-selling album Last Splash (1993). In 1994, the band went into hiatus after Deal's identical twin sister, Kelley, entered drug rehabilitation. During The Breeders' eight year break, Deal adopted the stage name Tammy Ampersand and formed The Amps, who recorded a single album, Pacer in 1995. She resumed her role as The Breeders' guitarist for their third album Title TK in 2002, and reunited with the Pixies in 2004. The Breeders released their fourth studio album, Mountain Battles, in 2008.

Description above from the Wikipedia article Kim Deal, licensed under CC-BY-SA, full list of contributors on Wikipedia.