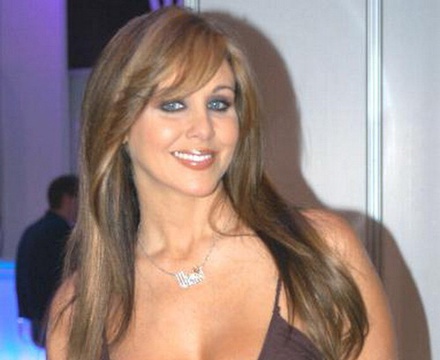 ​When people describe an encounter with adult film legend Julia Ann, they often express sentiments to the effect of, "She is simply one of the most beautiful, nicest people I've ever met," as if someone of such iconic importance couldn't also be down-to-earth, personable, and approachable. People with such a mystique and reputation aren't typically like Julia Ann. In fact, there is no one else quite like her. Julia Ann's 2002 debut as a Wicked Girl was in Jonathan Morgan's big-budget historical comedy Hercules, which garnered an AVN Nomination for Best Sex Comedy. The ambitious performer's follow-ups to this performance include Brad Armstrong's Class Act and Porn Star, Toni English's Love & War, and Morgan's romantic drama The Assignment. The sultry blonde-haired, blue-eyed Californian has also reaped much success on Playboy TV, where her many appearances have included a multi-year hosting association with Playboy's Naughty Amateur Home Videos.  In one of her most noted Wicked productions, the aptly titled Beautiful, this skilled actress delivers what many consider to be one of the definitive roles of her career. It was the emotional range, depth, and sustained intensity of her bravura performance that allowed Julia Ann to walk home with a richly deserved trophy for Best Actress after the 2004 AVN Awards in Las Vegas. This would be the second of three consecutive years wherein Julia Ann was nominated for Best Actress. She had been nominated in 2003 for Paradise Lost and would be nominated again in 2005 for Killer Sex & Suicide Blondes. Julia Ann was also inducted into the AVN Hall of Fame in 2004. While many veteran performers of her caliber would have been content to retire after such a career milestone, Julia Ann has worked to perfect her craft. She has continued to create and star in new projects, a point beautifully illustrated in 2005's designer release Wicked Divas: Julia Ann, The Legend.  In addition to her many triumphs in adult, Julia Ann has also starred in the R-rated cult-film favorite Veronica 2020, worked on the wildly successful 20th Century Fox romantic comedy The Girl Next Door, modeled for the cover of the Mercedes-Benz lifestyle magazine Benzo, and been a nation-wide spokesmodel for Third Rail Clothing.  A deeply intellectual, introspective woman with a heart for others, Julia Ann often involves herself in selfless acts of charity. When the adult industry was rocked by a health crisis in 2002, Julia Ann restarted Blondage, her legendary dance duo with Janine, and organized a benefit for the Adult Industry Assistance Fund. They earned thousands of dollars in donations in just one evening. Today, Julia Ann continues to participate in groundbreaking projects, whether it's appearing on radio for charity (she raised thousands of dollars for the Million Minute March, a national charity designed to provide overseas troops with phone cards) or giving career-best performances in such releases as Julia Ann: Hardcore and Around The World In 7 Days. With a classy look that showcases her stunning eyes and flowing hair, Julia Ann continues to explore her sexuality in such projects as Randy Spears' Touched and the upcoming July release Melt.

For this legend, the best is truly yet to come!