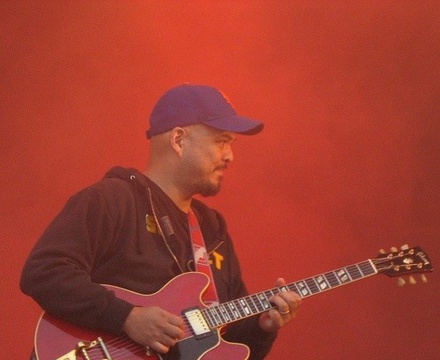 Joey Santiago (born Joseph Alberto Santiago on June 10, 1965) is a Filipino-American guitarist and composer. Active since 1986, Santiago is best known as the lead guitarist for the American alternative rock band Pixies. After the band's breakup in 1993, Santiago produced musical scores for film and television documentaries, and he formed The Martinis with his wife, Linda Mallari. He also contributed to albums by Charles Douglas and former Pixies fellow bandsman Frank Black. Santiago resumed his role as the Pixies' lead guitarist when they reunited in 2004.

Santiago has described his guitar technique as "angular and bent," and he cites Les Paul, Chet Atkins, Joe Pass and Jimi Hendrix as major influences on his style. His guitar playing, as part of the Pixies' sound, was held in high regard by critics: MTV's Laurel Bowman commented that Santiago's "sonic plow was the key element in the Pixies' monstrous presence."

Description above from the Wikipedia article Joey Santiago, licensed under CC-BY-SA, full list of contributors on Wikipedia.​