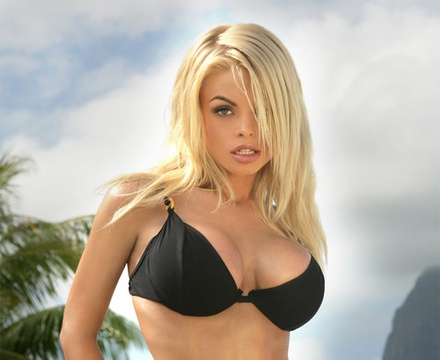 A superstar in her own right, Jesse Jane is an all-American blonde, green eyed, sultry girl originally from Ft. Worth, Texas. In three short years she ascended from Hooters manager to Hawaiian Tropic pageant winner to international fame with a Digital Playground contract.

Digital Playground launched Jesse Jane into superstardom with global exposure on hundreds of magazine covers including: FHM, Maxim, Front, Strip Las Vegas and Arena. She has earned leading roles on HBO's "Entourage" and in the feature Baywatch: The Movie, among others. Jesse has also starred in a multitude of music videos from Drowning Pool to Robbie Williams.

Jesse's exuberant love of life and bubbling personality have made her a favorite and frequent radio guest on Howard Stern, Bubba the Love Sponge, and hundreds of Clear Channel stations nationwide. She has been syndicated weekly with football picks on The Adam Carolla Radio Show. Jesse's skills as a personality host on VH1, Much Music and CTV, as well as character roles on shows like "Celebrity Uncensored," "Celebrity Fit Club" and "Gene Simmons Family Jewels" have earned her worldwide recognition.

In 2005, Jesse landed her own show on Playboy TV, "Naughty Amateur Home Videos" and was named host of a second show, "Night Calls." Her dating and sexual experiences earned Jesse the title of entertainment editor for Cheri magazine. She also pens regular columns for Genesis and Buzz magazines. Jesse's superb ability to entertain garnered her the most prestigious honor in the adult business, host of the 2006 AVN Awards show.

All of the exposure Jesse has received in various media outlets has contributed to her success but it was her leading role in Digital Playground's benchmark film, Pirates that made Jesse Jane a household name.