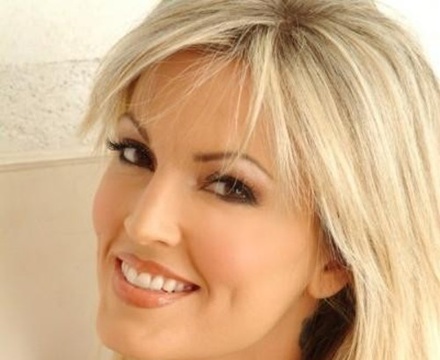 Janine, an enormously popular superstar, returned to the Vivid Entertainment Group in 2004. The classic beauty with fabulous eyes and trademark luxurious blonde hair also had a major announcement: she would begin performing with men. Upon returning to Vivid, Janine stated, "I feel peaceful and at ease with myself. I had a mental roadblock about working with men on film, but that is gone and I feel totally liberated and as excited as a schoolgirl at the thought. I've watched the business change over the years and hope that adult will never lose its edge. I love being a little naughty." A self-described tomboy, she chose modeling rather than attend college on an athletic scholarship. She was offered a Penthouse centerfold on the basis of a test shoot and her Penthouse magazine and video appearances launched her career in adult films. She was invited by the celebrated Andrew Blake to do her first XXX film, "Hidden Obsessions" in 1993, a huge success. Janine signed with Vivid and starred in best selling films such as "Blondage" and the popular "Where The Boys Aren't" series. Additionally, she has won numerous AVN awards.

The hottest sex stars are gathered together for a wild and spectacular Playboy celebrity photo session. We've got behin…