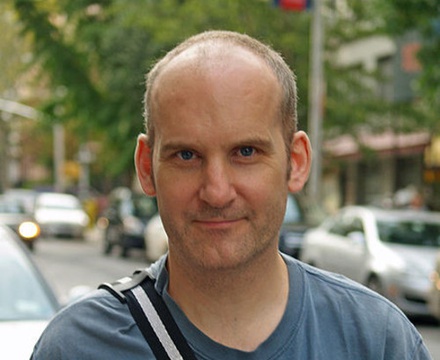 Ian Thomas Garner MacKaye (born April 16, 1962) is an American singer, songwriter, guitarist, musician, label owner, and producer. Active since 1979, MacKaye is best known for being the frontman of the influential hardcore punk band Minor Threat, the post-hardcore bands Embrace and Fugazi, as well as The Evens.
He is a co-founder and owner of Dischord Records, a Washington, D.C.-based independent record label.
A key figure in the development of hardcore punk and an enthusiastic promoter of an independent-minded, do it yourself punk ethic, MacKaye also works as a producer, and has produced releases by Q and Not U, John Frusciante, 7 Seconds, Nation of Ulysses, Bikini Kill, Rites of Spring, Dag Nasty, and Rollins Band. Along with his seminal band Minor Threat, he is credited with coining the term "straight edge" to describe an ideology that eschews drug and alcohol abuse, though MacKaye has stated many times that he did not intend to turn it into a movement.

Description above from the Wikipedia article Ian MacKaye, licensed under CC-BY-SA, full list of contributors on Wikipedia.

Shot from 1987 through 1998 on super 8, 16mm and video, Instrument is composed mainly of footage of concerts, interview…