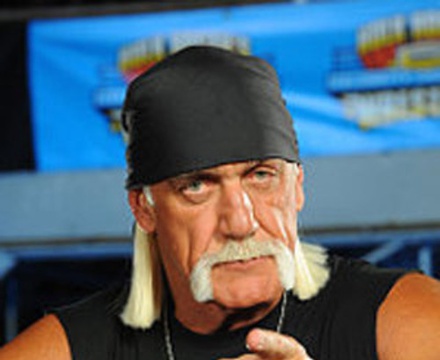 Terry Gene Bollea (born August 11, 1953), better known by his ring name Hulk Hogan, is a professional wrestler currently signed to Total Nonstop Action Wrestling. Hulk Hogan's crossover popularity led to several television and movie roles. Early in his career Bollea played the part of Thunderlips in Rocky III (1982). He also appeared in No Holds Barred (1989), before starring in the family films Suburban Commando (1991), Mr. Nanny (1993), Santa with Muscles (1996), and 3 Ninjas: High Noon at Mega Mountain (1998). He starred in his own television series, Thunder in Paradise, in 1994. He is the star of The Ultimate Weapon (1997), in which Brutus Beefcake also appears in a cameo. Bollea also starred in a pair of television movies, originally intended as a pilot for an ongoing series for TNT, produced by Eric Bischoff. The movies, Shadow Warriors: Assault on Devil's Island and Shadow Warriors: Hunt for The Death Merchant, starred Hogan alongside Carl Weathers and Shannon Tweed as a freelance mercenary team. In 1995, he appeared on TBN's Kids Against Crime. Bollea made cameo appearances in Muppets from Space, Gremlins 2: The New Batch (the theatrical cut) and Spy Hard as himself. Hogan was offered the role of Zeus in Little Hercules in 3D on an episode of Hogan Knows Best and was shown during the filming of the movie. He also had a cameo at the end of the movie Little Monsters. Hogan also made two appearances on The A-Team (in 1985 and 1986), and along with Roddy Piper, Hogan lent his voice for a few episodes of the stop-motion animation skit show, Robot Chicken. He guest-starred in a two-part episode of Suddenly Susan in 1999. In 2001, Hogan guest-starred on an episode of Walker, Texas Ranger, playing a reformed criminal now operating a Christian Community Center and helping Walker steer teenagers away from gangs. Bollea hosted the comeback series of American Gladiators on NBC in 2008. He also hosted and judged the short-lived reality show, Hulk Hogan's Celebrity Championship Wrestling.