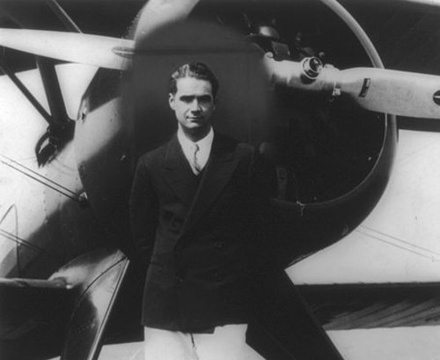 Howard Robard Hughes, Jr. (December 24, 1905 – April 5, 1976) was an American business magnate, industrialist, aviator, engineer, film producer, director, hotelier, philanthropist, and was one of the wealthiest people in the world. He gained prominence from the late 1920s as a maverick film producer, making big-budget and often controversial films like The Racket (1928), Hell's Angels (1930), Scarface (1932), and The Outlaw (1943). Hughes was one of the most influential aviators in history; he set multiple world air-speed records, built the Hughes H-1 Racer and H-4 "Hercules" (better known to history as the "Spruce Goose") aircraft, and acquired and expanded Trans World Airlines which would later on merge with American Airlines. Hughes is also remembered for his eccentric behavior and reclusive lifestyle in later life, caused in part by a worsening obsessive–compulsive disorder. His legacy is maintained through the Howard Hughes Medical Institute.

Description above from the Wikipedia article Howard Hughes, licensed under CC-BY-SA, full list of contributors on Wikipedia.