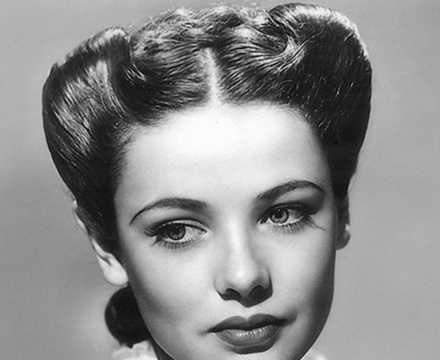 Gene Eliza Tierney was an American film and stage actress. Acclaimed as one of the great beauties of her day, she is best-remembered for her performance in the title role of Laura (1944) and her Academy Award-nominated performance for Best Actress in Leave Her to Heaven (1945).  Other notable roles include Martha Strable Van Cleve in Heaven Can Wait (1943), Isabel Bradley Maturin in The Razor's Edge (1946), Lucy Muir in The Ghost and Mrs. Muir (1947), Ann Sutton in Whirlpool (1949), Maggie Carleton McNulty in The Mating Season (1951) and Anne Scott in The Left Hand of God (1955).

Tierney married twice, first to costume and fashion designer Oleg Cassini on June 1, 1941. She and Cassini had two daughters, Antoinette Daria Cassini (born October 15, 1943) and Christina "Tina" Cassini (born November 19, 1948).
In June 1943, while pregnant with Daria, Tierney contracted rubella during her only appearance at the Hollywood Canteen. Daria was born prematurely in Washington, D.C., weighing only three pounds, two ounces (1.42 kg) and requiring a total blood transfusion. Because of Tierney's illness, Daria was also deaf, partially blind with cataracts and had severe mental retardation. Tierney's grief over the tragedy led to many years of depression and may have begun her bipolar disorder. Some time after the tragedy surrounding her daughter Daria's birth, Tierney learned from a fan who approached her for an autograph at a tennis party that the woman (who was then a member of the women's branch of the Marine Corps) had sneaked out of quarantine while sick with rubella to meet Tierney at her only Hollywood Canteen appearance. In her autobiography, Tierney related that after the woman had recounted her story, she just stared at her silently, then turned and walked away. She wrote, "After that I didn't care whether ever again I was anyone's favorite actress." Biographers have theorized that Agatha Christie used this real-life tragedy as the basis of her plot for The Mirror Crack'd from Side to Side. The incident, as well as the circumstances under which the information was imparted to the actress, is repeated almost verbatim in the story. Tierney's tragedy had been well-publicized for years previously. During this time, Howard Hughes, an old friend, saw to it that Daria received the best medical care available, paying for all of her medical expenses. Tierney never forgot Hughes' acts of kindness.

Tierney separated from Cassini, challenged by the marital stress of Daria's condition, but they later reconciled and had a second daughter, Tina. During her separation, during the filming of Dragonwyck, she met a young John F. Kennedy, who was visiting the set. They began a romance that ended the following year, when Kennedy told her he could never marry her because of his political ambitions. Tierney then reconciled with Cassini, but they divorced on February 28, 1952. In 1960, Tierney sent Kennedy a note of congratulations on his election victory; she later admitted that she had voted for Richard Nixon, saying, "I thought that he would make a better president."

In 1958, Tierney met Texas oil baron W. Howard Lee, who was married to Hedy Lamarr from 1953 to 1960. Tierney and Lee married in Aspen, Colorado on July 11, 1960, and lived in Houston, Texas. She loved life in Texas with Lee and became an expert contract bridge player. In 1962, 20th Century Fox announced Tierney would play the lead role in Return to Peyton Place, but she became pregnant and dropped out of the project. She later miscarried.

Tierney's autobiography, Self-Portrait, in which she candidly discussed her life, career and mental illness, was published in 1979.

On February 17, 1981, Tierney was widowed when Lee died after a long illness.

Gene Tierney died in 1991, shortly before her 71st birthday, of emphysema in Houston, Texas. She had started smoking after a screening of her first movie to lower her voice because "I sound like an angry Minnie Mouse." She became a heavy smoker, which contributed to her death. She is interred next to Lee in the Glenwood Cemetery in Houston, Texas.

In 1986, Tierney was honored alongside actor Gregory Peck with the first Donostia Lifetime Achievement Award at the San Sebastian Film Festival Spain for their body of work.

For her contribution to the motion picture industry, Tierney has a star on the Hollywood Walk of Fame at 6125 Hollywood Boulevard in Hollywood, California.

Martin Scorsese is among those paying tribute to Gene Tierney, the Academy Award-nominated American actress who was a l…