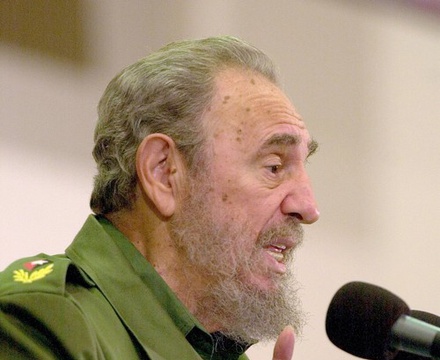 Fidel Alejandro Castro Ruz (  born August 13, 1926) is a Cuban politician, socialist revolutionary, and former political leader of the country.  As the primary leader of the Cuban Revolution, Castro served as the Prime Minister of Cuba from February 1959 to December 1976, and then as the President of the Council of State of Cuba and the President of the Council of Ministers of Cuba until his resignation from the office in February 2008. He served as the First Secretary of the Communist Party of Cuba from the party's foundation in 1961 until 2011. In 2006, he was succeeded by his younger brother, Raúl Castro, who is the current President of the Councils of State and Ministers, and who previously served under Fidel as Minister of Defence from 1959 to 2008.

While studying law at the University of Havana, he began his political career and became a recognized figure in Cuban politics. His political career continued with nationalist critiques of the president, Fulgencio Batista, and of the United States' political and corporate influence in Cuba. He gained an ardent, but limited, following and also drew the attention of the authorities.  He eventually led the failed 1953 attack on the Moncada Barracks, after which he was captured, tried, incarcerated, and later released. He then traveled to Mexico to organize and train for an invasion of Cuba to overthrow Batista's government, which began in December 1956.

Castro subsequently came to power as a result of the Cuban Revolution, which overthrew the US-backed  dictatorship of Batista,  and shortly thereafter became Prime Minister of Cuba.  In 1965 he became First Secretary of the Communist Party of Cuba, and led the transformation of Cuba into a one-party socialist republic. In 1976 he became President of the Council of State as well as of the Council of Ministers. He also held the supreme military rank of Comandante en Jefe ("Commander in Chief") of the Cuban armed forces.

Following intestinal surgery from an undisclosed digestive illness believed to have been diverticulitis,  Castro transferred his responsibilities to the First Vice-President, his younger brother Raúl Castro, on July 31, 2006. On February 19, 2008, five days before his mandate was to expire, he announced he would neither seek nor accept a new term as either president or commander-in-chief.  On February 24, 2008, the National Assembly elected Raúl Castro to succeed him as the President of Cuba.  Castro is currently most active in commenting on world affairs, commonly in the form of his regularly published Reflections, articles offering his view on world events from US foreign policy to global warming. Description above from the Wikipedia article Fidel Castro, licensed under CC-BY-SA,full list of contributors on Wikipedia.

In 1985, Miguel Littin returned clandestinely to Chile and made this documentary divided in four parts about the politi…

Fidel Castro, the former President of Cuba and one of the most controversial figures of the 20th century, passed away i…