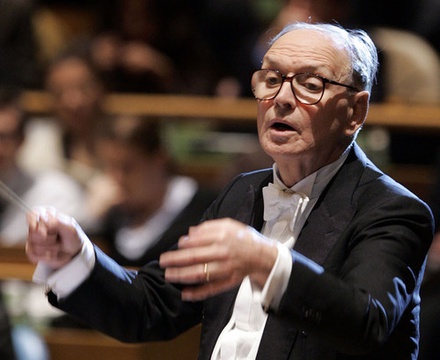 ​Ennio Morricone was born in Rome on 10.11.1928. His long artistic career includes a wide range of composition genres, from absolute music, which he has always produced, to applied music, working as orchestrator as well as conductor in the recording field, and then as a composer for theatre, radio and cinema.

In 1946 Ennio received his trumpet diploma and in 1947 he was engaged as composer for theatre music.
In 1953 he made his first arrangement for a series of evening radio shows.
In 1954 he received his diploma in Composition at the Conservatory under the guidance of Goffredo Petrassi.
In 1958 he obtained a job at RAI (Italian Television) as music assistant, but he resigned on the first day of work.
His career as film music composer started in 1961 with the film “Il Federale” directed by Luciano Salce, but he became famous worldwide with Sergio Leone’s westerns: A Fistful Of Dollars (1964),For A Few Dollars More(1965), The Good, The Bad And The Ugly (1966), Once Upon A Time In The West (1968)and A Fistful Of Dynamite (1971).
In 1965 Morricone entered the group of improvisation “Nuova Consonanza”;
in 1984, he and other composers founded the I.R.TE.M. (Institute Of Research For Musical Theatre) in Rome.

In his long career, Ennio Morricone has received many awards other than the Golden Lion and the Honorary Oscar, among which 8 Nastri D’argento, 5 Baftas, 5 Oscar Nominations, 7 David Di Donatello, 3 Golden Globes, 1 Grammy Award and 1 European Film Award. In the 2009 the President of the French Republic, Nicolas Sarkozy, has signed a decree appointing  M° Ennio Morricone to the rank of Knight in the Order of the Legion of Honor.

In the recording field, Morricone has received 27 Golden Records, 7 Platinum Records, 3 Golden Plates and the “Critica discografica” award for the music of the film “Il Prato”. The soundtrack from the film The Good, The Bad and The Ugly has been included in the list of inductees for the Grammy Hall of Fame 2009.

The Glance of Music

A documentary on the legendary film composer Ennio Morricone.