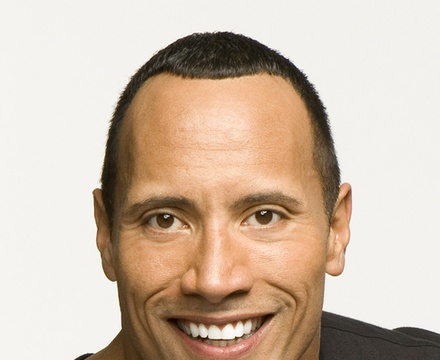 Dwayne Douglas Johnson also known by his ring name The Rock, is an American actor and professional wrestler, who as of 2011 is signed with World Wrestling Entertainment. He is occasionally credited as Dwayne "The Rock" Johnson.

Johnson was a college football player and, in 1991, he was part of the University of Miami's national championship team. He later played for the Calgary Stampeders in the Canadian Football League, but was cut two months into the season. This led to his decision to become a professional wrestler like his grandfather, Peter Maivia, and his father, Rocky Johnson. He gained mainstream fame as a wrestler in World Wrestling Entertainment (WWE), originally known as the World Wrestling Federation (WWF), from 1996 to 2004, and was the first third-generation superstar in the company's history. Johnson was quickly given a push in the WWF, first as "Rocky Maivia", and then as "The Rock", a member of the Nation of Domination. Two years after he joined the WWF, Johnson won the WWF Championship, and became one of the most popular wrestlers within the company's history for his engaging interviews and promos.

In 2001, he began acting and occasionally returned to the ring. His primary focus, as of 2011, is his acting career. Johnson's first leading role as an actor was in The Scorpion King in 2002. For this film, he received the highest salary for an actor in his first starring role, earning $5.5 million. He has since appeared in movies such as The Rundown, Be Cool, Walking Tall, Gridiron Gang, The Game Plan, Get Smart, Race to Witch Mountain, Planet 51, Tooth Fairy, Doom, Why Did I Get Married Too?, The Other Guys, and Faster.

The team talk to Sky Movies about their latest adventure, Fast &amp; Furious 6, in cinemas May 17th.