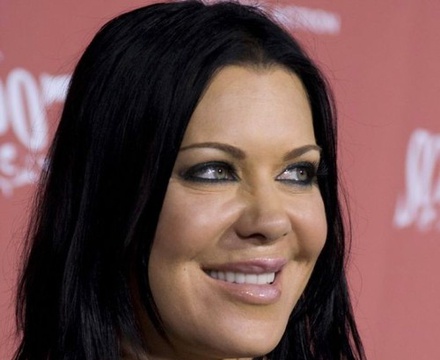 Chyna is an former American professional wrestler, actress, bodybuilder and pornographic film actress who was under contract to Vivid Entertainment. Chyna first rose to prominence upon debuting in the professional wrestling promotion the World Wrestling Federation (WWF) in 1997, where she performed under the ring name Chyna and was billed as the "Ninth Wonder of the World" (André the Giant was already billed as the eighth). A member of the stable D-Generation X, she held the WWF Intercontinental Championship (the first female wrestler to do so) and WWF Women's Championship, and was the first female wrestler to participate in the Royal Rumble and King of the Ring events. Since leaving the WWF in 2001, Chyna has wrestled sporadically, most notably with New Japan Pro Wrestling in 2002 and Total Nonstop Action Wrestling in 2011. Outside of wrestling, Laurer has appeared in Playboy magazine twice, as well as numerous television shows and films. In 2005, Laurer was a cast member on VH1's The Surreal Life, which led to several other celebrity reality appearances on the network, including The Surreal Life: Fame Games in 2007 and Celebrity Rehab with Dr. Drew in 2008. She is also known for her tumultuous relationship with fellow wrestler Sean Waltman, with whom she made a sex tape. It was released in 2004 and entitled 1 Night in China.

The women of the World Wrestling Federation travel to the Bahamas for a photo shoot, and the WWF Camera crews follow. F…