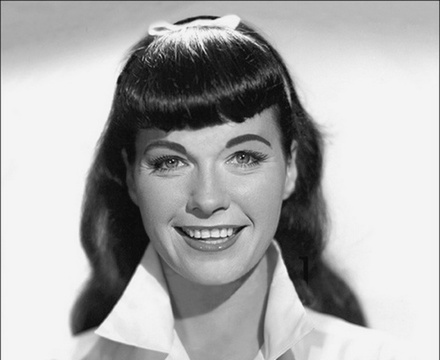 Bettie Page (April 22, 1923 – December 11, 2008) was an American model who became famous in the 1950s for her fetish modeling and pin-up photos. She has often been called the "Queen of Pinups". Her look, including her jet black hair, blue eyes and trademark bangs, has influenced many artists.

She was "Miss January 1955", one of the earliest Playmates of the Month for Playboy magazine. "I think that she was a remarkable lady, an iconic figure in pop culture who influenced sexuality, taste in fashion, someone who had a tremendous impact on our society," Playboy founder Hugh Hefner told the Associated Press.

In 1959, she converted to born-again Christianity, and later worked for Billy Graham. Her later life was marked by depression, violent mood swings and several years in a state psychiatric hospital. After years of obscurity, she experienced a resurgence of popularity in the 1980s.

Description above from the Wikipedia article Bettie Page, licensed under CC-BY-SA, full list of contributors on Wikipedia.

Bettie Page: The Girl in the Leopard Print Bikini

Featuring the vintage films, and pictures that made her a phenomenon, BETTIE PAGE, THE GIRL IN THE LEOPARD PRINT BIKINI…