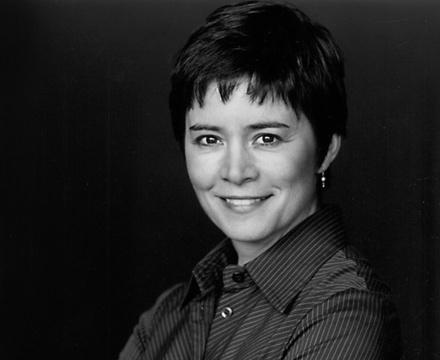 Ann-Marie MacDonald (born October 29, 1958) is a Canadian playwright, novelist, actor and broadcast journalist who lives in Toronto, Ontario. The daughter of a member of Canada's military, she was born at an air force base near Baden-Baden, West Germany.
MacDonald won the Commonwealth Writers Prize for her first novel, Fall on Your Knees, which was also named to Oprah Winfrey's Book Club.
She received the Governor General's Award for Literary Merit, the Floyd S. Chalmers Canadian Play Award and the Canadian Author's Association Award for her play, Goodnight Desdemona (Good Morning Juliet).
She also appeared in the films I've Heard the Mermaids Singing and Better Than Chocolate, among others.
Her 2003 novel, The Way the Crow Flies, was partly inspired by the Steven Truscott case.
She also hosted the CBC Documentary series Life and Times from 1996 to 2007.
MacDonald's wife is playwright and theatre director Alisa Palmer.

Description above from the Wikipedia article Ann-Marie MacDonald, licensed under CC-BY-SA, full list of contributors on Wikipedia.

For over a century, tens of millions of visitors have marveled at the natural beauty of Yellowstone National Park. But,…