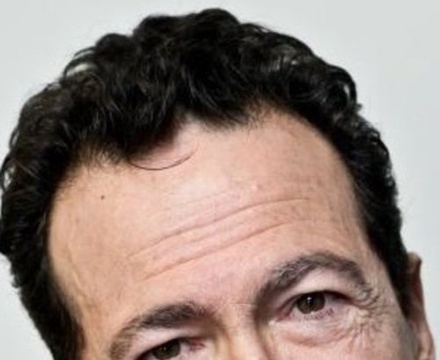 Andrew Secombe (born 26 April 1953 in Mumbles, south Wales), better known as Andy Secombe, is a Welsh actor, voice actor, and author. Son of comedian/singer Harry Secombe (whom he later impersonated in a Goon Show special), the younger Secombe is probably best known for providing the voice of Watto in the Star Wars prequels. Andy provided the voice of anotherToydarian in Star Wars: Knights of the Old Republic II: The Sith Lords. He subsequently shifted to writing, penning fourfantasy novels to date: Limbo; Limbo Two: The Final Chapter; The Last House in the Galaxy; and Endgame. Earlier in his career, he played Rover the Dog in the Channel 4 children's series Chips Comic (1983) and appeared as a regular in the BBC TV children's sketch show "Fast Forward". In 2005, he returned to acting, becoming part of another science fiction franchise by playing Colin the Security Robot inThe Hitchhiker's Guide to the Galaxy: Quintessential Phase. He published the book Growing Up with the Goons in 2010.

A very personal portrait of the truly unique comedy genius of Spike Milligan, as told in his own words and featuring ex…