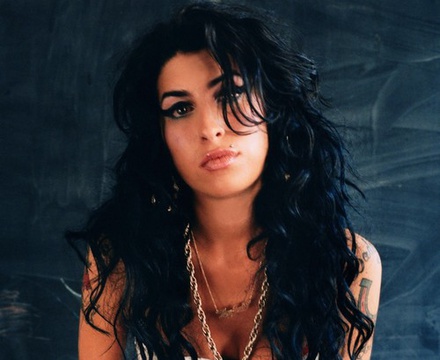 Amy Jade Winehouse (14 September 1983 – 23 July 2011) was a British singer-songwriter known for her powerful contralto vocals and her eclectic mix of musical genres including R&B, soul and jazz.
Winehouse's 2003 debut album, Frank, was critically successful in the UK and was nominated for the Mercury Prize. Her 2006 follow-up album, Back to Black, led to six Grammy Award nominations and five wins, tying the record for the most wins by a female artist in a single night, and made Winehouse the first British singer to win five Grammys, including three of the "Big Four": Best New Artist, Record of the Year and Song of the Year. On 14 February 2007, she won a BRIT Award for Best British Female Artist; she had also been nominated for Best British Album. She won the Ivor Novello Award three times, one in 2004 for Best Contemporary Song (musically and lyrically) for "Stronger Than Me", one in 2007 for Best Contemporary Song for "Rehab", and one in 2008 for Best Song Musically and Lyrically for "Love Is a Losing Game", among other prestigious distinctions. The album was the third biggest seller of the 2000s in the United Kingdom.
Winehouse was credited as an influence in the rise in popularity of female musicians and soul music, and also for revitalising British music. Winehouse's distinctive style made her a muse for fashion designers such as Karl Lagerfeld. Winehouse's problems with drugand alcohol abuse, and her self-destructive behaviours were regular tabloid news from 2007 until her death. She and her former husband, Blake Fielder-Civil, were plagued by legal troubles that left him serving prison time. In 2008, Winehouse faced a series of health complications that threatened both her career and her life.
Winehouse died at the age of 27 on 23 July 2011 at her home in London; police have said that the cause of her death was "as yet unexplained".