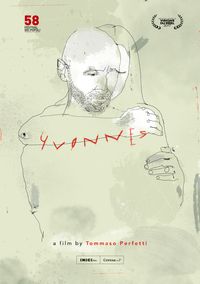 Vincenzo has always led a marginal existence. He is now 42 and has not seen his daughter for a long time. One day, he takes the train to go and see her, not even knowing if he will be welcome.

Yvonnes. A life in the margins

Vincenzo is 42 years old and has not seen his daughter for a long time. But today he finally decides to take a train to see her.

The deeply introspective journey is characterized by the coexistence of real and fictional elements. Documentary  is combined with  genre cinema and strongly characterize  the path of the film, its story, its characters.

Then there are suggestions  of film noir genre , with night urban atmospheres and suspended moments. In this ballet that mix reality and fiction the camera chooses to investigate the psychology of the protagonist.

The sound is broad and gives life to the space that the images do not show. The world around is therefore a world of noises, voices, of distances, which is never described but remains perceived and imagined.