When People Die They Sing Songs 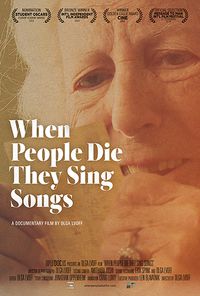 This documentary tells the compelling story of a mother and daughter who resolve to uncover their wartime past buried half a century ago.

When People Die They Sing Songs. A mother and daughter fighting oblivion

After suffering a stroke, 93-year-old Holocaust survivor Regina is getting music therapy. Accompanied by a music therapist, Regina sings Yiddish and French songs of her youth.

Her daughter Sonia is with her at every session. This revitalizes their mother-daughter relationship and emboldens them to revisit their past.

The past they were so eager to forget they are now anxious to remember. Yet Regina’s memory is rapidly succumbing to dementia.